skip to main | skip to sidebar

Some of you know that I have a very BIG sweet tooth. I love chocolate, brownies, cakes, muffins and just about every other baked good that you can image.  I've heard a lot of talk about the King Arthur's Flour, but I had yet to see it in my local stores.
That all changed on my Saturday shopping trip!  Right away, I grabbed the gluten free muffin mix, a cartoon of eggs, and a box of blueberries, and I couldn't wait to make them!
The recipe could not be easier, you simply mix all of the ingredients together and bake for 18 - 20 minutes. Then enjoy! :) 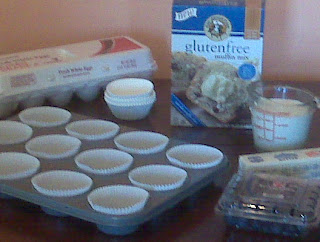 All of the ingredients: eggs, butter, milk, mix, optional (but necessary) blueberries. 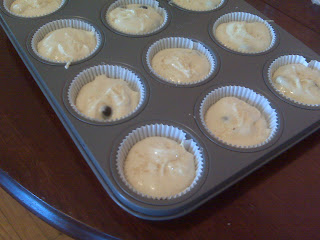 Ready to go in the oven. 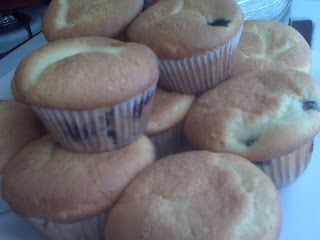 I love to meet other gluten free individuals, and with my move to NYC...I'd love to start a Gluten Free Monthly Dinner in NYC.

We choose a restaurant in the city each month that we visit and get to know each other and enjoy a gluten free meal together.  Many restaurants get a small group or a couple of gluten free diners each month.

Imagine booking a reservation of 30 - 40 gluten free diners in one night! Think of the impact that we can have on restaurants in New York and around the world.

What do you think?  If you're interested...e-mail me at info@glutenfreelifestylecoach.com, and I will put together a list of individuals!
Posted by Jenna Drew at 6:24 PM No comments:

Yes, the rumors are true.  I am moving once again this year.  For those of you who may have followed me for a while now, it's ok, I allow you to roll your eyes!

I am a young woman on a mission, and I am open to relocation to follow my dreams and my desires. Even if it means re-packing all of my belongs and driving about 7 hours in a car.

Over the past year, I have moved a total of 5 times:

From my gluten free blogging endeavors, I know there are a lot of gluten freebies in the Big City, and I would love meet some of you!  If you'd be interested in getting together in New York City or Northern NJ, send me an e-mail at jenna@glutenfreelifestylecoach.com.  (Note...I won't officially be moved in until the middle of September...so we may have to wait until October to meet.)

I will be starting my MBA program this fall as well as offering gluten free classes and coaching both online and in-person (more details to come very very soon)!
Posted by Jenna Drew at 1:41 PM 1 comment:

Last night, we dined at La Paris 66 in Shadyside. I’ve been wanted to go there for a while now to try their gluten-free options! When we walked in, we were greeted by a friendly “bon soiree” by the owner and led to a quaint table on the back patio under the festive lights. The mood wasn’t stuffy or pretentious at all – simply a relaxed South of France atmosphere.

The restaurant was BYOB, so we brought our own bottle of red, Spanish Tempranillo/Shiraz mix (yes, I know what you're thinking...Spanish wine to a French restaurant). After it was corked, we made our first ‘chin chin’ to travelling to France in one year’s time.

Our first course was a shared La Paris 66 galatte, made from buckwheat and filled to the brim with ham, cheese and a sunny-side-up egg with mushrooms, tomatoes and salad on the side. It was absolutely delicious and reminded me of the months I spent in France. 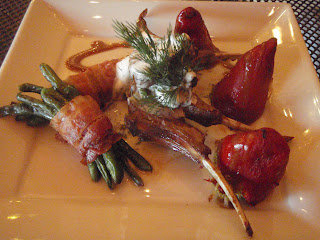 My next course was the evening’s special, roasted lamb with potatoes and bacon-wrapped green beans (he had me at bacon). Now, before I ordered, I told the waiter of my gluten intolerance and he went to speak with the French chef. When the waiter returned, he said the potatoes on the side were not gluten-free, but the chef would be happy to prepare something else that would be gluten-free. The chef specially made me a second side of pablano peppers stuffed with a rice and rosemary blend which was more amazing than the original side. I had forgotten the aromatic and complexity of French meals! 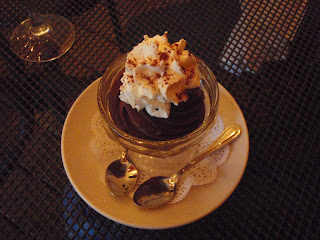 We finished the meal with a shared a chocolate mousse made with 65% Belgian chocolate. I felt as though with each bite, I was dipping my spoon into the most delicious dark chocolate bar I had ever tasted.

Thank you Paris 66 for the fabulous tastes of France right here in Pittsburgh, PA.
Posted by Jenna Drew at 5:53 AM No comments: 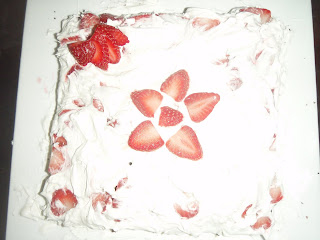 On Mother's Day, I was in charge of making the gluten free dessert.  So, naturally I went for a Betty Crocker Devils Cake.  I was feeling a little decorative after watching an episode of Cake Boss, and I added an extra flair with some strawberries.

Not the prettiest job icing, but it's an attempt. My favorite part is the strawberry flower in the middle.  I'll tell you how it tastes soon!
Posted by Jenna Drew at 1:22 PM No comments:

All You Need Is Love Nutella. 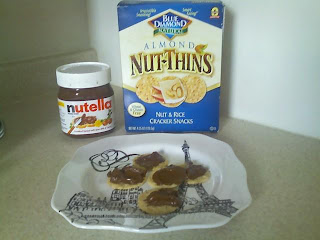 Snacking can be hard when you're on a Gluten Free diet.  You always have to watch out for those "hidden" ingredients.  Today, I'm eating not only a delicious snack but one that takes me back to my months spent in the South of France.
In France, people don't eat peanut butter.  They eat Nutella - a "creamy, chocolaty hazelnut spread"(TM).  In my opinion, Nutella tastes great on just about anything.  Before you try anything crazy though, I recommend spreading a dollup on Blue Diamond Almond Nut Thins.  The combination of flavors tastes great!
Enjoy!
Posted by Jenna Drew at 9:19 AM No comments:

I just received this message from Jackie Russo of Pennsylvania's Perfect Pageant system.

A dear friend of her, Christina, gave her this message. Her niece Amber is 13 years old. She has been fighting a severe brain disease for the past 12 years. Amber has been life flighted 110 times and has been in 17 commas. She is coming to the end of the road. There is nothing more they can do for her. They are now saying that she probably won't make it until next Christmas. One of her favorite things is getting mail. Christina and Ambers mother are trying to spread the word to see how many cards or letters Amber can get from different states and countries.. To read more about her please visit http://prayernet.geisinger.org/ name code damo56..


Please if you have just a moment in your day...send her a card of encouragement. And the little time it took you to read this email you could in return send this letter to everyone you know. Her address is Amber Dougherty, 2766 Bald Eagle Pike, Tyrone, Pa., 16686.

If this were your child or family member I'm sure you would encourage this as much as you were able. I do not personally know Amber but i think that every ounce of encouragement and happiness we can bring to Amber will help her with the time she has left on this earth.
Please pass this along. Thank you.
Posted by Jenna Drew at 7:24 AM 1 comment:

How to Get Started with Gluten Free 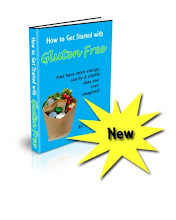 Thank you for joining us at PNC Park to promote Celiac Disease Awareness on Sunday, September 27, 2009! Click here to see pictures from the event!

It's time again for Congress to re-evaluate the child nutrition programs, including the National School Lunch and School Breakfast Programs.

This is your chance to tell lawmakers about the needs of celiac students and urge funding for special diets so that ALL children can have lunch at school.

This bill will help educate our nation's leaders so they can gain a better understanding of the impact this disease has on so many.

GIG assisting a research group interested in learning more about weight issues for persons with gluten intolerances. The survey does not collect identifiable personal information.
Click Here to take survey to take this survey. It should take less than 5 minutes of your time.Thank you for participating in this valuable research survey.